"This space for rent"
Top

It has been sleepy around here, eh?

From the archives, a Lionel 35 and 36 I cosmetically refurbished a looooooong time ago: 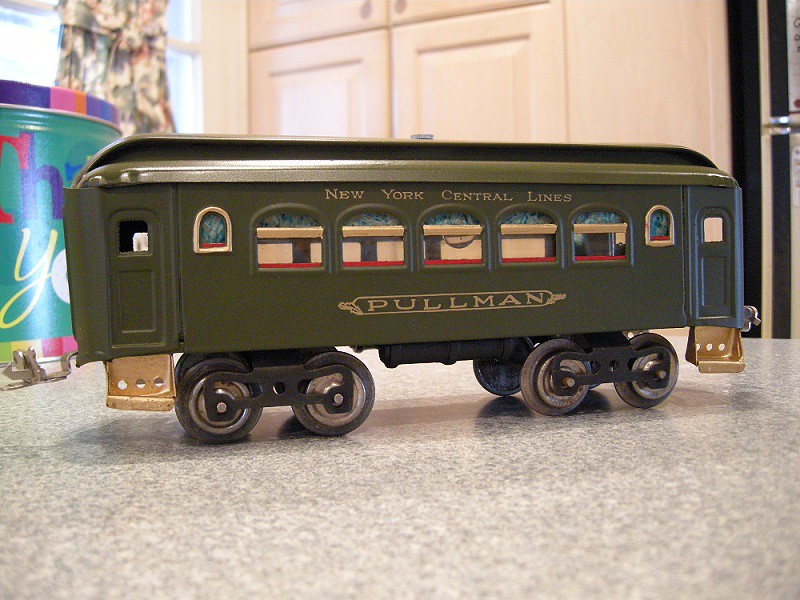 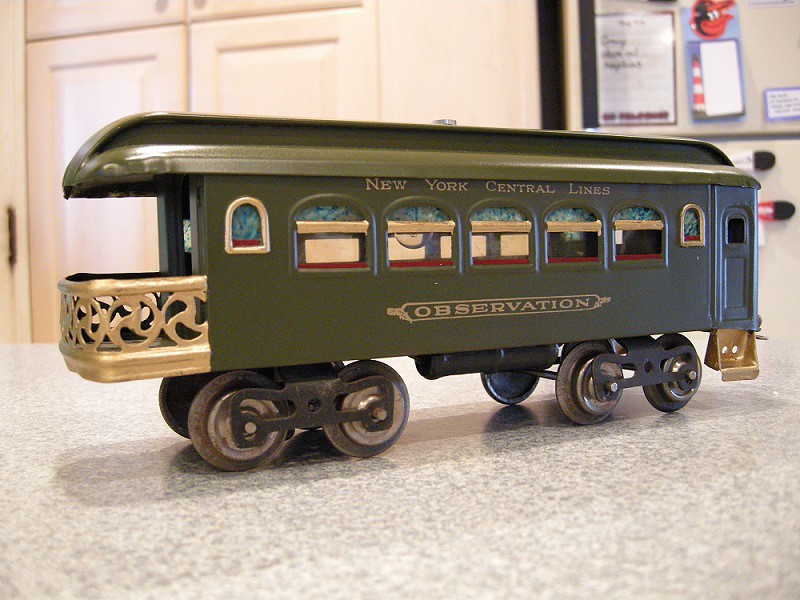 I never got around to rewiring the lighting...need to do that. Also have another 35 in pieces someone gave me...it's on the project list.

My guess is that before you re-did them they looked like junk.
In my opinion they are now beautiful model train cars.
I understand that some pieces of "junk" will sell for more in that
condition than after they are refurbished. Why?
roger

I support thread drift.
If God didn't want women to be looked at, He would have made 'em ugly. RAH
Top

To be honest, I've never understood that either, Roger. I don't see much value in a piece that retains some small percentage of its original paint, but then I'm an operator, not a collector. I will say that as I've gotten older and further down the road in finding stuff, I've grown somewhat reluctant to refurbish stuff. I don't need everything to look pristine...I've come to appreciate a few nicks and scratches, they are toys that were played with, after all.

The 35/36 were in very rough shape. I bought them from an old guy at a meet who had refurbished the 33 locomotive that went with them, but had never gotten around to the cars. At the time it seemed a good idea to finish what he started.
Top

Standard gauge whilst travelling in the way-back machine: 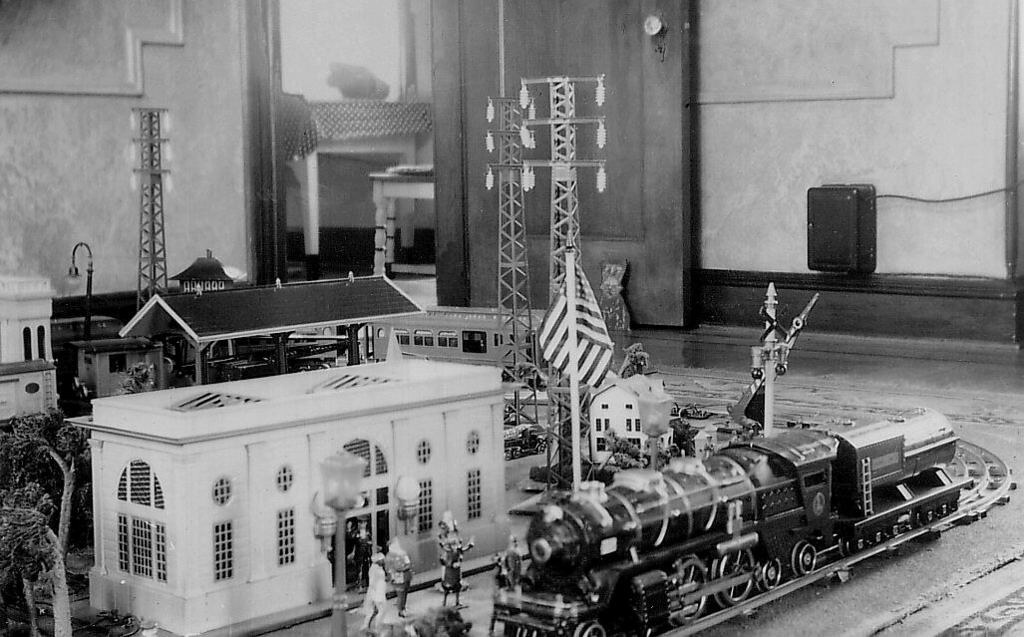 Some serious 1930s coin to be seen here.

Yes! Very nice.
And your comment is very true.
roger

I support thread drift.
If God didn't want women to be looked at, He would have made 'em ugly. RAH
Top

Dave - Jacques Kelly, columnist for the Baltimore Sun, has a great standard gauge set-up in his Charles Village home's basement. Most of the stuff belonged to his father or grandfather. After nearly 100 years of use, it's far from pristine, but damn fun to see.

From the archives, a Franklin Mint Mercedes 300SL matched up with an MTH 9E: 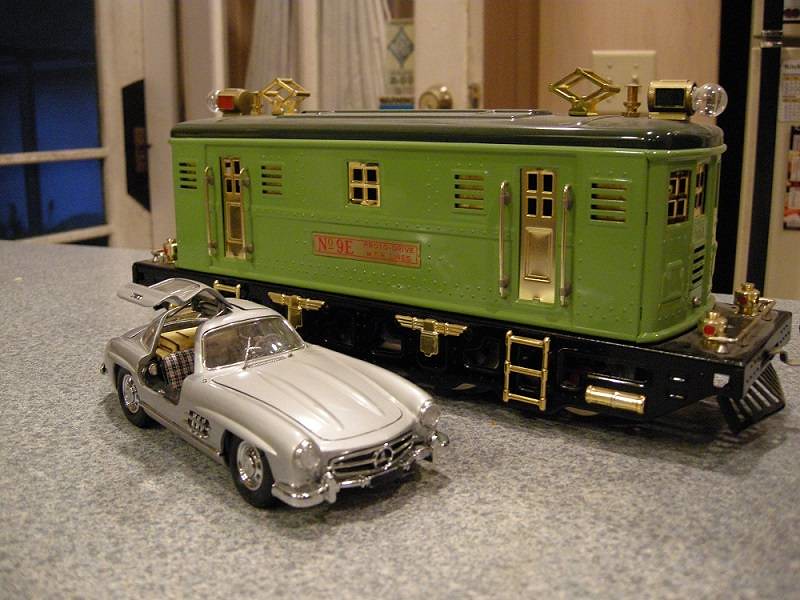 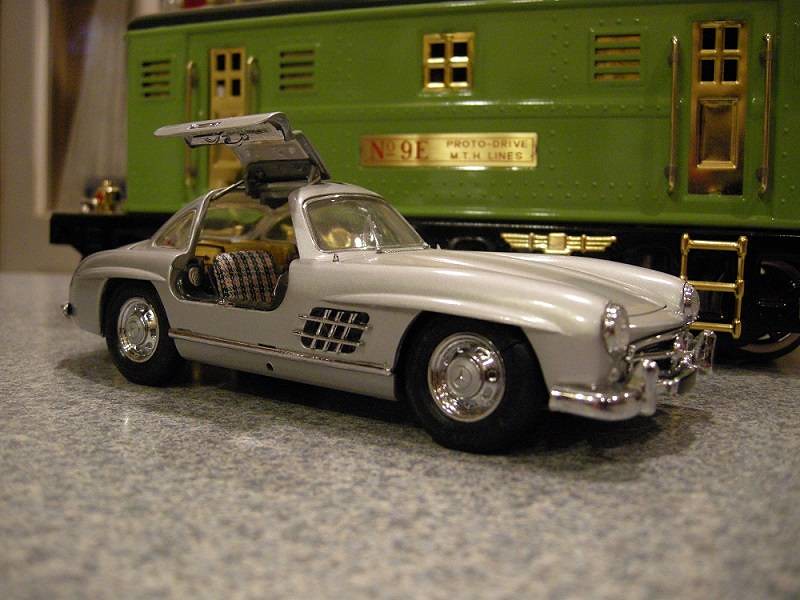 I need to find a source for replacement tires for the Franklin Mint stuff. This one is pretty old and they are starting to crumble.

The ten-year licensing arrangement between Lionel and MTH for the production of Lionel Corp. branded toys expires in 2019, and MTH has announced that their production of those will end. See here:

I suspect sales of reproduction tinplate have fallen to levels where it's no longer economically viable to produce it and pay Lionel its licensing fee. If production continues, it will most likely be branded "MTH Lines" as it was in the past. That's actually fine with me, because that's what it is. It would be great if MTH could muster up the where-with-all to produce some unique stuff, i.e. a 600E (4-6-4), or a tin SW-2 or something, but I suspect the economics of creating new tooling has passed.

In 1982 we flew down to Orlando to go to Disney World. After Disney we drove down to Miami, We went to Cypress Gardens and down to Sarasota to see the "Lionel train and Seashell museum".This is one of the pictures I took while we were there and a link to a video that someone else took.

I believe that Richard P. Kughn bought the museum

Nice stuff. I always liked the 408, the sheer mass of it.

To some extent I figure Kughn "saved" the 3-rail toy train industry, while at the same time, he was an example of wretched excess.
Top

Roger - Saw an example of your big Flyer wide-gauge bridge at York...asking price was $550.

I support thread drift.
If God didn't want women to be looked at, He would have made 'em ugly. RAH
Top
Post Reply
64 posts

Users browsing this forum: No registered users and 1 guest