glad you are feeling better ...the PA looks great ... thank you again for all the work on Mr Collins' GG1 .
Cheers Carey
Top

Nice job straightening those battons, Bob. They weren't off by much, but enough to distract the eye.
Fun stuff indeed
Top

I am running short of 42" Lobaugh wheelsets, which work for the PA. Had to raid a UP Centipede tender last night. Anybody got spares?
Top

If I had any, I'd being mailing them out.
Teach a man to fight, and he’ll owe you a debt. Kill a man, and that’s one less potential enemy to worry about.
Top

I did not know that Lobaugh (or anybody else) made 42" wheelsets. Do they look like a bigger version of the Lobaugh freight and passenger car wheelsets, or is there something otherwise unique about them?
Fun stuff indeed
Top

Identical to the 33 and 36" wheelsets, only 7/8" over the tread. All GPs, FT/3/7 etc., and all PAs use 40 or 42" wheels. The E6/7/8/9 used 36" wheels. Not sure about the freight Alcos or the SD-series.
The wheelsets I stole last night came with the postwar Jabelmann Challenger tender kit. Fortunately, I was robbing a spare truck.
I think I missed a stack of them that Mr. Poplar was offering. He said they were 1", but I suspect he was measuring over the flange. More will turn up - they always do.
Top

Got back to the E7 this evening. Straightened the belt batten, then added the vertical channels to the vents. Working on the windows - might go full-on rectangular rims.

Number boards were glued on - and each had two giant holes drilled in the nose that showed outside the casting. They got filled with 6-32 rod and await solder. Plan is to drill a smaller hole to clamp the number board castings in exactly the right place, Heat, and permanently solder.

Not sure you will see the difference, but here is the E7 left side ready for handrail removal and paint. The belt rail is now almost straight, and close enough for a doorstop. The number boards are soldered on, and I am thinking about opening them up. No need to rush these things - as Maroon says, each "owner" adds a little bit to the project. Maybe the next guy down the line will power this thing; I will be dedicated to replacing the sprockets on my powered doorstops (a one month project!). I have a few 42" wheels but they're 145 tread from NWSL. Not really direct replacements for your Lobaugh. 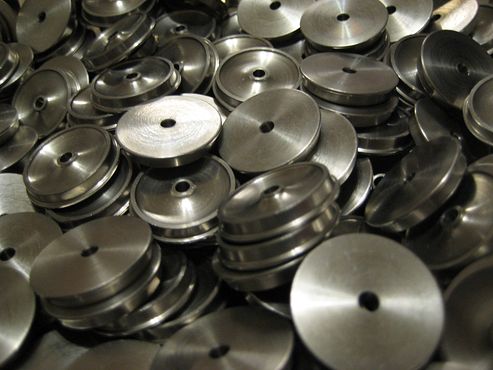 Thanks! I have an awful time pressing wheelsets without wobble, and I have a jig of sorts. My minimum is a tread of about .155, due to deficiencies in track laying skills.

Proper wheels show up on eBay periodically - I'll get some.
Top

I haven't forgotten this thread.

First, a glove got punctured in the bead blaster. Then somebody put walnut shells in there. Then they ordered beads, but last week were thinking of a purge before loading. So I decided walnut shells would be ok - what the heck? and I discovered a broken hose, which got duct tape (quack, quack).
Plenty of air; no media. Still not working after two weeks. I will let the younger mechanics figure it out.

So ok, it is quite attractive in brass. I have never been happy with the NYC - the lower windows appeared too small; the sides are not perfectly straight, and no drip rail above the sides. I brought it home, opened up the windows a bit, added a drip rail (it is supposed to be a rivet strip, but who cares) and today shot it in white primer. Just gave it a precautionary 175 degrees for 45 minutes, and later I will spray the black on roof and fuel tank.

Tomorrow it will get some orange, and Thursday I shall hit it with blue - and start the search for Central of Georgia decals. It will look better - even though I decided I had done a passable job with the NYC lightning stripes.
Top

Bob if you can't find any I got the Walthers and Champ decals for the cab units, note though,
I don't think either have the needed car body striping for either the "civil war" or "collard greens" scheme, just the heralds, road name and numbers and that winged nose mustache.
Litigation Crisis Consultant- remediating legal-media issues; mitigating federal, state and local investigations, court orders etc. Your serial felony history, contractual defaults, bankruptcies no big deal.
contact morbo@getoffthehook.com
Top

Perfect! I am doing the B&O scheme above that has no prototype, and since the C of G had so many paint schemes I am going to assume they had one close to Maroon's E7. Plus, I do my own stripes. Not that they are all that great on these soltered on batts.
Top

Bob, if you get a chance, please post a photo of the unit as-primed. I think it is the best way to judge a model in regards to its construction. Paint can hide a lot.

Not trying to put you on the spot -- I am guessing if you were happy with it you would be re-doing it.

Sure. Good thing I checked - will be spraying orange in about 30 minutes. Roof is already black.
Top
Post Reply
75 posts

Users browsing this forum: No registered users and 10 guests